Quinoa, a product beyond fads with great innovation potential.

From its beginnings, the basis of Nutexa resides in taking advantage of the plants with greater benefits for health. The vast majority of our products are close to us: olive trees, vineyards, citrus, rosemary … But, in order to honor our commitment, it is necessary to include plants from other parts of the world. Quinoa is one of them.

For several reasons: great nutritional quality, health benefits and versatility of use. Quinoa is a functional food in every sense: both in terms of biological and economic level. It is no coincidence that FAO declared 2013 as the International Year of Quinoa. Even NASA has included this plant in their experimental programs and the crew uses quinoa seeds as a source of ecological subsistence in space travels.

Quinoa is almost the perfect plant. It contains all the essential amino acids for the body, and, in comparison with other vegetables, a large amount of protein. It conteins a lot of starches too. So we can say quinoa is a complete food in terms of macronutrients as carbohydrates provide great energy while proteins provide resources for a proper functioning of the human body (boost immunity and help build and repair tissues). On the other hand, this plant has an extraordinary capacity to adapt to different territories, and its production cost is quite low in comparison with other plants.

Considering that the lack of proteins is one of the main causes of death and disease in the Third World, quinoa is an alternative to consider in order to resolving the problems of malnutrition in those regions with limited economic resources to afford animal proteins and more expensive agricultural crops.

In fact, quinoa, along with potato, was for centuries the basis of the diet of the indigenous peoples of the Andes, where the plants is from. Some findings date its cultivation in 5000 years B.C. And it seems that since the beginnings was already stored for periods of low harvest.

Its extension along the Andes and the fact that it has been cultivated by different population groups has provoked, on the other hand, that today we can count more than three thousand varieties of seeds.

Nowadays quinoa is also cultivated in some regions of North America, Europe and Asia, where in the last years it has become quite popular as consumers lean for more natural products and it is treated like a gourmet ingredient in several restaurants.

The reason why today marketing considers quinoa as a superfood is due to its extraordinary composition. To begin with, quinoa is a pseudocereal, that is, it contains a large amount of starches but is not a gramineum, so for all intents and purposes it is a gluten-free cereal.

As for the protein content, the average stands at 16 grams of protein per 100 of quinoa, but it may exceed 20% depending on the variety. These figures are considerably higher than the amounts of protein contained in cereals. In fact, a diet based exclusively on quinoa would meet the daily protein requirements of the human body established by World Health Organization and FAO in 2003: from 10 to 15%. 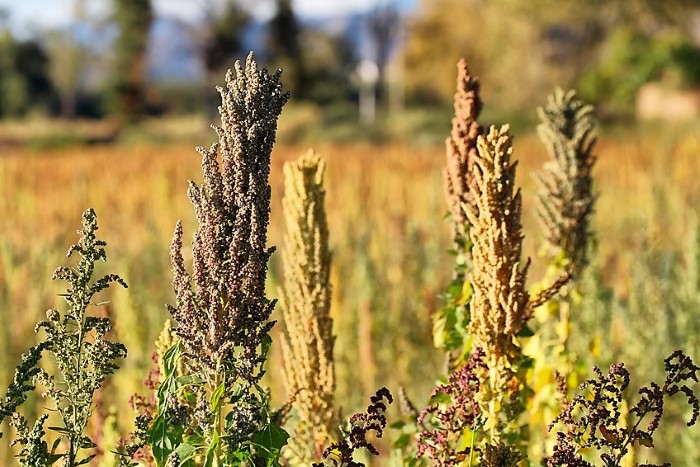 On the other hand, it has a large amount of micronutrients that explains why it has been used as a therapeutic plant by the Andean peoples in a multitude of symptoms and ailments: from bone fractures to migraines.

Therapeutic properties of quinoa that contribute to health improvement (although we must insist that it is not the only responsible in resolving problems neither it has to be always effective):

The versatility of the plant explains its medicinal use. For example, its leaves may be used in dressings or infusions. And the same thing happens in the kitchen. Apart from cooking grains, leaves can be eaten fresh (in a salad for example) or cooked in soups or stews.

About this last, quinoa is an ingredient with great potential in the field of culinary innovation and for the food industry. For example, ground grain makes the dough to absorb more water and, consequently, be more resistant. In fact, in Bolivia and Peru there is a great tradition of replacing wheat flour with quinoa in bread and biscuits.

In you want to receive more information about the quality of our quinoa seeds, please click on this link.